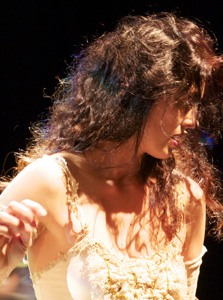 Caitríona O’Leary is known internationally for her intense and passionate performances of Early Music and Traditional Irish song and as a composer.

Her recording, The Wexford Carols, featuring guest artists Tom Jones, Rosanne Cash, and Rhiannon Giddens, reached #1 on the Billboard and Amazon charts. Her album with Anakronos, The Red Book of Ossory, was released worldwide in 2020 to rave reviews.

November 2021 has seen her onstage with Anakronos with their new project Citadel of Song, Plague-proof Ballate from Boccaccio’s Decameron, the resulting album will be released on Heresy Records in early 2022.

She has recorded over twenty critically acclaimed albums with her Trad band Dúlra, her Early Music performance ensemble eX & the ensembles Sequentia, The Harp Consort and Joglaresa amongst others and has worked closely with many of early music’s leading artists including Christopher Hogwood, Ben Bagby, Andrew Lawrence King, Konrad Junghänel and Pedro Memelsdorff.

Caitríona is also active as a soloist in contemporary music productions and recordings. In November 2016 she played leading roles in Roger Doyle’s electronic opera, Heresy and in 2019 performed on the studio recording of his iGirl. In 2020 Caitríona performed in Nick Roth’s composition Crann. Known for her performances of Irish language interpretations of the songs of Kate Bush, Joni Mitchell, and Brecht/Weill for IMRAM, Féile Litríochta Gaeilge, she released an Irish version of Joni Mitchell’s Both Sides Now (“transcreated” by Gabriel Rosenstock) as Ón Dá Thaobh in February 2020. In October 2019 she composed and performed a show based on a new Irish language version of the poetry of Sappho for IMRAM and in 2020 composed and performed the video piece StampHaikuSong.

Always a champion of unaccompanied song and ever-interested in alternative performance formats, Caitríona has been a regular artist at the Cáca Milis Cabaret and was a weekly performer at Le Dernier Paradis. To create and perform during the COVID19 pandemic, she started Unaccompanied – a series of micro-concerts of “beautiful, intentionally-unaccompanied song”, livestreamed from her room.

Caitríona is the grateful recipient of funding from the Arts Council (Music, Traditional Arts, and Touring) and Fingal County Council Arts Office.